Graphic Novels in the Classroom 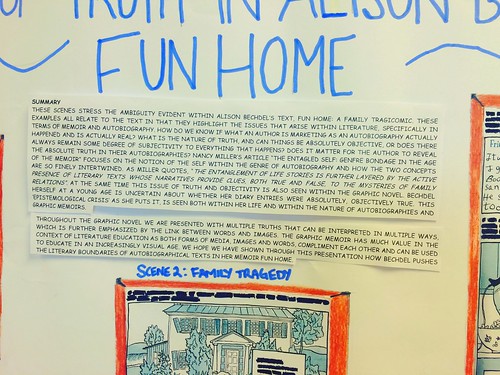 “What’s lost in translation is the complexity of loss itself. In the same box where I found the photo of Roy, there’s one of Dad at about the same age” (Bechdel FH 120).

Alison’s Bechdel’s graphic novel and memoir Fun Home (2006) is a complex, delightful, tragic, inter-textual text that offers the best of the visual and written medium. It deals with the coming-out of two characters, Alison the protagonist and her father Bruce. But, the novel is about much more as students discovered.

On October 15, 2015, Prof. dr. D.M. Oostdijk taught a Bachelor’s class on Fun Home that combined living in a visual culture, American Literature and pedagogic elements. Students were asked to make a poster presentation on panels from Fun Home that they would present to visiting High School students from the OSG in Hoorn.

Prof. Oostdijk began the class with some profound observations about the world we live in today. It is a visual age in which we are bombarded with images on a continual basis. This reverberates in our daily existence – television, screens, advertisements, signs, posters, flyers, even the word is (to quote W.J.T. Mitchell) an image. On paper it transforms, making what is written a multi-medial experience. How do we deal with this?

W.J.T. Mitchell’s book on Picture Theory (1995) makes us mindful of these aspects. It is about becoming savvy on the facets of visual culture. It is not merely the prerogative of intellectuals and academics — visuals are pervasive. It confronts children, and makes us question what is it that we see? How does it affect our mind? And, what does it imply for the future?

We do not have answers to these questions. Nevertheless, it is important to ask them. The fuelling of a critical mind that investigates these practices is vital to the task of literary studies and also for the Humanities.

As our first step into investigating Fun Home we delved into the differentiation between a comic book and a graphic novel. The comic – by definition – deals with aspects of comedy. The comic book is a form of entertainment, which is lighthearted, jovial and fun. Fun Home is different. Bechdel calls it a “traginomic,” a pun that is an amalgamation of the words tragedy and comic. Though, the book is more a graphic novel than a comic book.

In the book The Graphic Novels (2015) authors Jan Baetens and Hugo Frey argue that between the two genres lie, “…common scales of differences.”(7). They discuss four ways of distinguishing comic books from novels:

In conclusion, it was well established in the class that while comic books are an escape from reality graphic novels were an immersion into it.

Fun Home is not about fun, it hides within it the funeral home it houses. The gothic font used in the cover, in its connection with Leo Tolstoy’s Anna Karenina, the fall of Icarus, Oscar Wilde, amongst many other inter-textual elements; it is evocative of how knotty human relationships are. In loving her father Bechdel has to accept and deal with the inadequacies that make the man. In this she is confronted with her own struggles. She tries to elucidate this by reaching out to several texts, contexts, characters, that she uses to connect her story to a larger fabric.

The story is the narration of imperfections. But then who decides what is perfect? Who chooses the definition of normal? To quote from Anna Karenina, which begins with the line: “Happy families are all alike; every unhappy family is unhappy in its own way.” What are the variables in happiness and unhappiness? Isn’t the presence of happiness splendidly built on unhappiness? How do we know that we are happy if we haven’t been unhappy? The Bechdel family in their moments of vivid isolation harbor genuine warmth too. Illustrated in how Bruce plays with Alison wielding her like an airplane and their bath-time routine, in which the washing with water is almost redemptive. There are pockets of contentment in this dismal family-life.

The book questions family values but fortifies the need for love and physical affection. It destroys sexual and gender norms and asserts that as human beings we need to be sensitive and compassionate. Perhaps, we need to rethink the walls that we build, the boundaries we construct, and what is it that we hold so dear that we do not wish to lose at any cost?

The posters made by the teams reflected all these themes. They encapsulated how the words and images in Fun Home work cohesively in order to narrate the story. They are not in binary opposition to each other. Quite like happiness and unhappiness, which are often placed as counterparts but actually work together. Like sides of the same coin. The textual content combines with the graphic content to explore subtle aspects. The drawing of body language in the novel, managed to find definition in exercises posed by the students. Again, pushing our preconceived notions to breaking point.

The creating of posters in order to tell the story of a graphic novel was an effective way to engage the students into the process of making visuals. In this the class had a meta-quality. While the students selected and presented to the High School students they were also participating in visual culture. Their choices, medium, and agency, heightened the experience. Their awareness then moved towards deep learning through activating their minds.

In the end, the winner (democratically selected by the High School students) received a box of chocolates. This process connected the students to what their criteria were in appreciating the visual presentations that they had seen. As we laughed about the movie-quote from Forrest Gump (more visual culture), “Mama always said life was like a box of chocolates. You never know what you’re gonna get.” The class rolled up its posters and moved outside into the world.

There are plenty of boxes that we will land up opening and closing. It is moments of introspection in classes such as this that makes us aware how we label these boxes and what are the pictures that we choose to keep in them.

(The following article appeared in the VU Literature & Society website.)