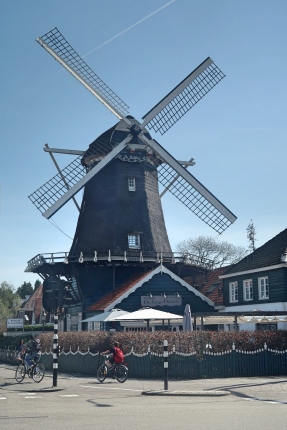 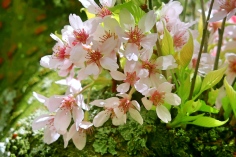 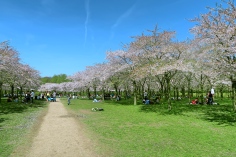 Bambi (resident 10yo) and I put on our walking shoes, strapped on our backpacks, grabbed our picnic lunch, and headed off to see the Cherry Blossoms at the Kersenbloesempark located in the forest or the Amsterdamse Bos.

The trek from Amsterdam, via Metro and two bus changes, to the Amstelveen side of the Bos was confusing as well as annoying, but the sight of those gorgeous 400 Cherry Blossom trees, standing in a circle, made it all so worth it.

History is that the trees were a gift from the Japan’s Women’s Club (JWC) in 2000 (Aside for those, like me, born in the seventies: indeed “history” because it was 18 years ago, yes, year 2000 was eighteen years ago, take a moment, take a moment, now exhale!). The park celebrates the wonderful connection shared between Japan and the Netherlands, which dates back to 1609 when the first formal trade relations between the two countries was established.

During the Sakura (Cherry Blossom) festival, the Japanese practice “Hanami,” a centuries-old practice of picnicking under the blooming trees. The short life of the Sakura is meant to signify the ephemeral nature of life, its fragility, and calls attention to mindfulness, each moment is significant and should be celebrated, lest life slips by. It is also about cycles and karma, themes deeply embedded in Buddhist and Hindu philosophy.

As we sat below the trees, with sushi and chocolate croissants, sipping on limonade and Coke, Bambi said, “These petals falling they are like blessings.” He said it and the world froze, time stood still, cascading corollas suspended mid air, not a flicker, nor a sound, for that minute – everything made sense, everything was in place. And, then as though someone pressed the “play” button again, reality seeped in. The dogs were running around once again, kids squealing, crying, someone getting their wedding photoshoot done, selfie sticks were hoisted up like flags, the world buzzed. But, a split second had disengaged from the eternal ticking and in some labyrinth, I think, it floats, dancing with the Sakuras.