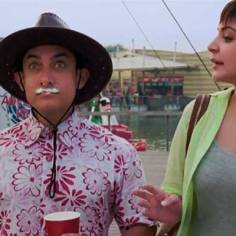 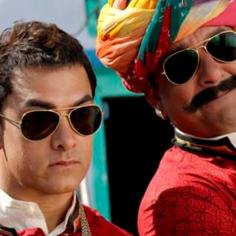 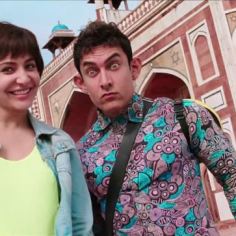 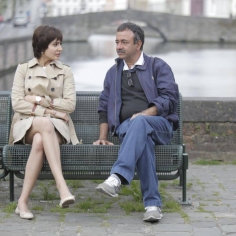 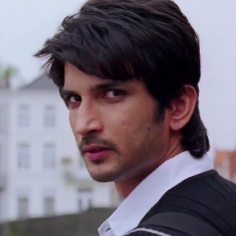 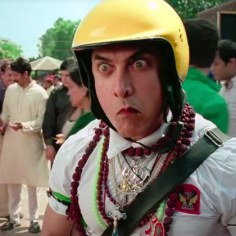 Have the reviews and counter-reviews for PK died down? Because, in that case, now would be a good time to write down my thoughts about the movie. For starters: I did enjoy the film and here I will try to delve a little into why I was motivated to do so, amongst usual blog-like meanderings.

On a side note (that did not take long), I have come to notice the stylistic aspects of Bollywood cinema: Sanjay Leela Bhansali’s opulent, colorful, glitzy sets, choreographed dance dramas, the earthy sounds of thumping dhol and bold matriarchs. The celebrate-your-Indian-family even outside India, Manish Malhotra-esque sob sagas, return of the prodigal sons of Karan Johar. The rustic, gutsy, dusty landscape of Vishal Bhardwaj, complete with ethnic sounds and dialogues, from globalize to lets localize. The friends, journeys, finding your own light in the midst of many others, the disco, urban accounts of the Akhtar siblings. The light-hearted, tropical, catchy beats, slick intertextual (references to other films) tales of Farah Khan, and, now I can add to that the social-phenomena-motivated stories of Raj Kumar Hirani. In a Hirani movie we must have a female media person, a down-to-earth funny hero who turns things around, a national chant for change and waltz numbers with scooters or cycles.

I enjoyed the meta texture in PK. For example, the picture of Gandhi only holds value when it is linked to economics; the only images – on calendars, notebooks, posters – are tossed away. While I’m no Gandhian like Hirani is, and I do understand the nature of currency and markets, I could see the inherent philosophical nature of that scene. That cultures develop to associate value to otherwise meaningless things – white for the bride, white for the widow – that it is indeed a human attribute to start constructing social rituals – it was intriguing, humorous, and ironical to watch it in the Indian context.

Jagat Janani, the meaning of that particular name intrigued me, who is Jagat Janani? Mother Nature or is this a reference to the Mother Goddess. She is female. In relationship to her is the alien character, a male, who questions the social formations – of religion and culture. The juxtaposition of the male as being otherworldly, and Jaggu as that which gives birth to the ‘jagat’ or world was quite a gripping proposition and if one were to explore this further I am sure we could work on a layered referencing to this within the text of the film. It is Jaggu who notices the odd one out in ‘her’ world, it is she who helps him understand strands (firki and otherwise) that PK has missed. And, above all it is she who is kind (gender trouble – ahem!). She is given an identity, a name by the ‘bad guy’ is this an urge to rethink (for who has dictated how the world should proceed) how we have thought and defined the origin of the world and the nature of living.

The music of the film is lovely. I have enjoyed each song on the track, the robust Rajasthani sounds in “Tharki Chokro.” I was repeatedly reminded of Parineeta while listening to the numbers – “Chaar Kadam” like “Piyu Bole” and “Bhagwan Kahan” like “Raat Hamari” and when I was looking up information about these two films I found that these songs shared the same music director Shantanu Moitra, same lyricist Swanand Kirkire and in the case of “Chaar Kadam” and “Piyu Bole” they were sung by Shaan and Shreya Ghoshal. Quite the coincidence!

As expats, and migrants, we meet Pakistanis, Bangladeshis, Sri Lankans, who are mistaken as Indians, or (unfortunately) clubbed together as Indians. Sometimes, (again very unfortunately) the larger section of the populace misses the point that these are countries with varied cultures, influences and they have rich, heterogeneous heritages. This point gets beautifully put across by Sushant Singh Rajput who plays such a subtle and lovable role. An Amitabh-loving, Urdu poet, studying, working a part-time job at the embassy, humorous, shy, well-mannered, respectful, what a wonderful way to re-think the manner in which we perceive. Finally, who betrays is not so much the guy who we have been taught to suspect but our own narrow-mindedness. Perhaps, it is naïve to think this way, maybe the third generation of Indians (for this is an Indian film) post the independence have softened their views on partition, however, and as part of that generation, and the descendant of grand-parents who have lived through the living nightmare that 1947 was, maybe it is time for a rethink. And, if we as human being lose the ability to challenge and question, to learn and move on, then maybe this “gola” is truly “lul.”

The question of religion or the religion question, whether within – worship the small idol, or the big one in the temple, is “daan” a fees, of gurus and their gyaan, or between religions – Hindu and Muslim is a tricky one to handle – given the matchstick-striker ratio that operates within the world’s largest democracy. To the credit of Indian cinema and Bollywood, it has addressed these issues in a manner that has been ‘acceptable’ – here acceptable means getting released with least (sort of) amount of disarray within makers of the film, audience and censors, here least is used in a rather liberal (sort-of) fashion – Mani Ratnam’s Bombay (1995), Shyam Benegal’s Mammo (1994), Aparna Sen’s Mr and Mrs Iyer (2002) immediately come to mind but I am sure there are many more. PK offers a critique of religious dogmas, giving a bitter spoonful with ample gloss and sugar. To make such a film you need a decent amount of conviction in what you want to say and how you want to say it – any imbalance could spell disaster. PK manages the tight rope well with the message of a direct contact with the maker and no wrong numbers.

I don’t view PK as a catalyst to change; I view it as the start of a conversation, quite in the manner that 3 Idiots and Taare Zameen Par required for us to at least glance at the education system that we have been put through. For change to come through it will take something far more intense, radical, and even bizarre, in the meantime, “Dil ko behelane ko Ghalib yeh khayal achcha hai.” For all the movies you could have made Mr. Hirani – you made a good one.

YouTube has an extensive collection of “Making of PK” videos – a must watch if you want to see how the movie comes together.